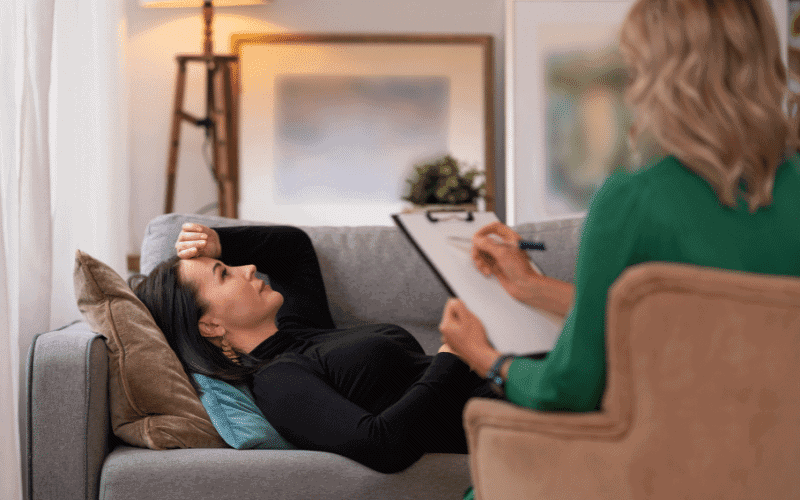 What is Rational Emotive Behavior Therapy?

REBT is an approach that helps people to identify thoughts and feelings that are self-defeating, question the rationality of those, and replace those beliefs with something that is more rational and helpful to deliver more positive consequences.

According to REBT, the behavior and emotions of people are directly related to the beliefs or thoughts of them. That’s why therapists who conduct REBT sessions at first help the patients to identify the irrational thoughts and beliefs. Once those are identified, they work with the patients to measure the rationality of those. In the case of irrational beliefs, they work together to alter or change the beliefs into rational ones.

What are the Three Main Beliefs of REBT?

These are the three main beliefs that lead us to do negative activities in response to an event or situation.  The first one is liable for guilty, anxiety, shame, and depression. The second one leads to negative actions against others, for example- aggression, anger, rage, and acts of violence. The third one is responsible for procrastination and self-pity.

What Is The Ellis ABC Model?

The ABC model is further expanded to D and E which has made thins an ABCDE model that represents what REBT does more perfectly. Below are the two new principles-

What is the Goal of Rational Emotive Behavior Therapy?

REBT stands on a single goal. It is very clear and straightforward, just like the techniques in it. The main goal of REBT is-

The goal of RBT takes us to the way it works. REBT therapy is designed depending on the main goal of REBT. Below is the way how REBT works.

Rational Emotive Behavior Therapy works following three main steps. These are given and described below-

As REBT believes that irrational thoughts have a great impact on the mental condition of a person, it focuses on recognizing irrational beliefs at the very first step of the process. However, to identify those, obviously, the therapist and the patients should have a relation of minimum trust and comfort.

In most cases, irrational thoughts and beliefs are expressed as absolutes, which means, the thoughts that contain ‘I must do it or ‘I must not do it.

Thoughts and beliefs like these don’t let someone accept reality. In real life, everything won’t go according to someone’s beliefs. As a result, when something happens that was not expected, they tend to express negative behavior.

Also, these types of beliefs don’t provide any zone of acceptance. According to these beliefs, everything should happen according to their preference. And when the reality doesn’t match such high expectations, negative expressions come out. Negative expressions like low self-esteem, disappointment, anxiety, regret, etc. are the results of such beliefs.

In the long run, they remain unsatisfied with what they have and unfulfilled in their life.

So, at the very first stage, REBT focuses on finding out such irrational beliefs that give a vibe of absoluteness. The ‘I must do it, ‘this can’t have happened, ‘they must avoid doing this and such types of thought are identified and listed.

To find out such beliefs, the therapist asks questions or uses some other REBT techniques that work great to dive deep inside the minds of the patients and identify irrational beliefs. The techniques are developed from the very beginning of REBT.

Now it is time to challenge irrational thoughts and the whole thing must be done strongly and straight, without any hesitation. The therapist is the person who helps to do this. He/she has to be straightforward and strong in his/her approach.

This should be done in a way so that the irrational thoughts can’t come back later. Direct conversation and REBT technique- both ways are used to challenge these thoughts.

This is a very tough phase, even tougher than challenging the thoughts. For the patients, it is not so easy to accept others’ opinions replacing the opinion that they have had for decades. So, the therapist has to face a tough situation to bring the change.

Also, even if the patients want to change, their response to situations will not match the expected response on the first try. So, they might feel low and leave trying. It is very common because acting consciously is not always possible.

When they make mistakes, they become low. Here, the therapist has to make them understand that it is very common to be failed at primary approaches.

The changing phase is really struggling for the patients and tough for the therapist. But together they can make things happen. When the patients learn from the mistakes they’ve made, they can change their irrational thoughts into more rational beliefs.

What is REBT Used to Treat?

Rational Emotive Behavior Therapy or REBT is being used to treat a lot of problems and issues. Below is a list of some common problems that are being treated by REBT.

Also, there are many other disorders that can be fixed or reduced with the help of REBT.

The techniques of REBT can be divided into three main types. The three types are counted as the response to the three guiding principles of REBT. Below are the types of techniques that are mainly used in REBT.

Cognitive Restructuring Techniques (used to respond to the Beliefs)

These techniques are ways to change irrational beliefs. These help the patients to change their minds about the activating events. As a result, their internal beliefs and thoughts also become changed gradually. Some of the commonly used cognitive restructuring techniques are-

So, these are the common techniques used in Rational Emotive Behavioral Therapy. Besides these, there are many more techniques that can be used.

Not all the techniques above are used for everyone who is taking REBT. Depending on the experience of the therapist and the patient’s situation, the combination of the techniques varies.

For REBT, therapists may use a lot of exercises and worksheets in order to identify, challenge and replace irrational thoughts. These worksheets and exercises have been developed gradually with time.

Below are some of the common exercises and worksheets used in REBT. There are a lot more. All of these help the therapists to find out the activities that help to identify, challenge and replace damaging thoughts and beliefs.

This record comes with seven columns. Each of the columns contains different but related contents. The columns and the contents are given below-

This exercise helps the patient to identify their response to the situations clearly and consciously find out some alternative ways to think about situations. Thus, a regular record of thoughts and situations help them to develop a more conscious, positive and rational approach towards different situations.

The REBT Consequence Analysis worksheet comes with three sections. Each stage has its own content to write.

The very first section of the worksheet comes with a label called ‘Situation and Target’. In this section, the patient writes about a major issue that they’re facing. Besides, he/she also writes the most important values and goals regarding the situation.

The third section of the worksheet is named ‘Long-term Consequences’. This section is similar to the previous one but it contains long-term benefits they gain and costs they’ve to face because of the usual thoughts and behaviors they have.

When the sheet is filled up and the possible benefits and costs are written, now the patient has to answer a question- “Find out the best outcome in the long run.” This worksheet helps the patients to understand that their irrational behaviors and thoughts are resulting in something in the long run that is not their goal or expectation.

As a result, they understand the reasons why they should accept and implement some changes in their thoughts and behaviors.

To make them aware of the pros of rational behavior, the therapist can help them to fill up the sections again using more rational and positive thoughts and behaviors. This will help the clients to be more open to accepting the positive and rational thinking pattern.

The Positive Belief Record Worksheet is a worksheet that helps patients directly challenge irrational beliefs. To challenge those, it uses reasons for having rational belief and thought.

Below the boxes, there is a blank space with a heading- ‘Reasons that Support the New Belief’. In the blank space, the patient writes at least 10 facts that support the new belief. Also, the facts can be something that directly challenges the old belief. The facts, reasons, or pieces of evidence can be anything, like- someone’s advice, experienced events, or anything.

This is the way that directly challenges the irrational or old belief with enough reasons against it. And the most important thing is, most or all of the facts, reasons, or pieces of evidence come from the patient’s end. So, he/she can’t avoid the facts and ignore the need to replace the old thought with a new one.

The very first section of this worksheet contains a situation or activating event that creates an emotional response. The client should describe the situation with 4 major components-

These 4 things are a must while fulfilling this section.

The next section covers the natural or regular response to that specific event.

In this section, the patients should list the emotion, thoughts, and images they feel when the event takes place (things that are happening in their body and mind at the time of the event). Also, they have to write their response or the way they wanted to respond to the event.

The third section contains a rational and healthy response to that specific event.

Here, at first, the patients should target an emotion that should be achieved to ensure a healthy response to the event. After that, they have to list how they would think and respond to feeling the emotion.

This sheet compares two types of responses directly and makes the patients understand which one is a healthy response.

So, these are the basic pros and cons of REBT that you should know. If we check the cons, we must say that REBT is not for everyone. It is the responsibility of the therapist to know about the patients properly and try to understand if they are capable of taking the pressure of REBT or not.

How Long Does REBT Therapy Take?

There is no set length for REBT therapy. It all depends on the patient’s problem, situation, progress, and ability to learn. Typically REBT is a short-term process that might take 12-15 sessions. This is an average count. Depending on the factors, the number of sessions may vary. Each session can be of 40 to 60 minutes.

The main goal of REBT is to identify irrational beliefs, challenge those and replace those. An important part of this process is psychoeducation, which means teaching the patients how to continue the process. Once the patient learns to treat himself/herself, the sessions are over because the patient has to continue the practice for her whole life. Here, the therapist has nothing else to do.

So, when the question is about the time REBT takes to solve a problem, there is not any definite answer. But we can make an estimation that it takes around 12-15 sessions.

Typically, the therapists talk about how many sessions you’ll need after conducting 1-2 sessions. In these primary sessions, they check the patient’s ability to learn and accept, the current situation, and many other things which let them make a prediction about the number of sessions.